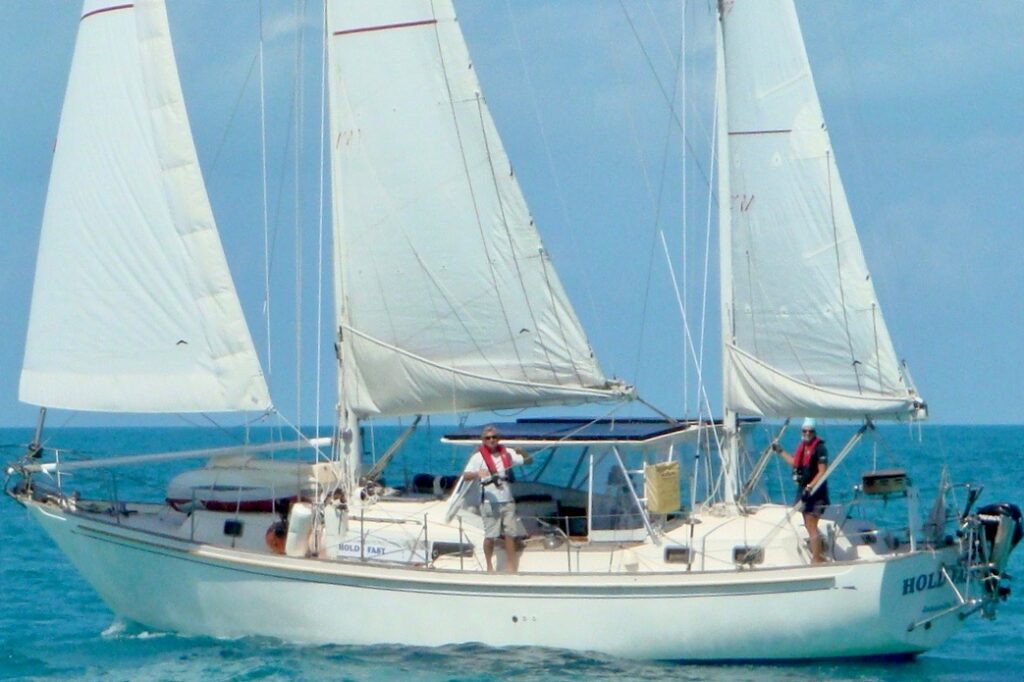 In 1993, Myron and Dena began sailing throughout the Channel Islands, and Catalina and Santa Barbara Islands, from their homeport in Ventura, California. In 1997, they sailed their sloop vessel, “Liberty,” down the western coast of Baja California, Mexico and then throughout the Sea of Cortez and down to Mazatlan. Upon their return in 1999, Myron surrendered to our Lord, Jesus Christ, and Dena re-committed her life to Christ.

Myron and Dena have been serving in ministry since 1999. Together they began their service in the church environment with 5th & 6th graders in San Diego, California, then young marrieds and college/career in Phoenix, Arizona, and then singles 30-40’s in Jacksonville, Florida. Dena also headed up the Woman’s Missionary Union in Phoenix. Their home was a place of gathering for all of these groups, as well as a place of Bible study, counseling, and all-night prayer vigils populated by those of 18 to 60 years of age.

In 2005, both Myron and Dena each separately heard a call from God to leave their jobs and step out in faith to serve the Lord full time on a boat. It took several weeks for them to bring up the matter, wondering how the other would react. Dena heard that they were five years away from departure. During those five years, they saved money, researched boats, and Dena’s employer in Scottsdale sold the company to a corporation in Jacksonville, Florida, a port town! Dena was one of two people to be relocated, praise God! They found their future home in a boat they named “Hold Fast,” from 1 Thessalonians 5:21 “Prove all things; hold fast that which is good.” They spent almost two years re-fitting her and continue to make improvements.

Their sea-going ministry has involved encouraging laypersons in churches who had lost their pastor, serving in VBS in churches along the way, ministering to other boaters who saw a difference in them (Christ!), talking openly with other boaters about Jesus and His Salvation, and answering questions about the Bible. “But sanctify the Lord God in your hearts, and always be ready to give a defense to everyone who asks you a reason for the hope that is in you, with meekness and fear” 1 Peter 3:15.

In the Bahamas, they volunteer in schools which encourages the teachers to promote the Bible camp they run, and guardians/parents get to know them and send the kids to Bible camp. The kids see they are cared for and want to come to Bible camp. Food is very expensive in the Bahamas, and for some kids, the dinner they get at the camp is more than they would get at home. They help out the local adults, sometimes with mechanical issues, and sometimes just sharing a fish Myron caught. They also work with locals on growing their own food and sometimes deliver hurricane relief items donated from other islands. They have learned to adapt the Bible camp, to include kids and teens (ages 4 to 17), even though it is advertised for 1st through 6th grade! Myron and Dena have found that they may have six kids the first night and 34 thereafter. They always need more volunteers for the Bible camp!

This past fall, the Lord called Dena home after a valiant fight against cancer. This winter Myron returned to Hold Fast to pick up where he and Dena left off.

God has a call on every believer’s life.  We can all simply answer that call in faith. “Also I heard the voice of the Lord, saying “Whom shall I send, and who will go for Us?” Then I said, “Here am I! Send me.” Isaiah 6:8